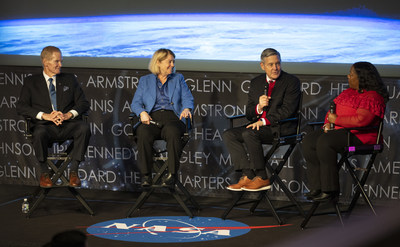 NASA launched its mega Moon rocket for the first time, sending its uncrewed Orion spacecraft around the Moon; kicked off a new era in astronomy with the Webb Space Telescope’s record-breaking new imagery from the cosmos; moved an asteroid in humanity’s first ever planetary defense demonstration; working with its partners, sent astronauts on regular missions to the International Space Station, tested new technologies, including an inflatable heat shield for Mars; continued development of quieter supersonic aircraft, and much more.

“There is no doubt that 2022 was out of this world! From the history-making splashdown of the Artemis I mission, to the groundbreaking images from NASA’s James Webb Space Telescope to the innovative LOFTID technology demonstration, the smashing success of the DART mission, incredible progress in our aeronautics programs, and the growth of partnerships with commercial and international partners, 2022 will go down in the history books as one of the most accomplished years across all of NASA’s missions,” said NASA Administrator Bill Nelson. “There’s so much to look forward to in 2023 too: More stunning discoveries from Webb telescope, climate missions that will tell us more about how our Earth is changing, continued science on the International Space Station, groundbreaking aeronautics developments with the X-59 and X-57 experimental aircraft, the selection of the first astronauts to go to the Moon in more than 50 years, and more. Space is the place and NASA proves humanity’s reach is limitless!”

In support of the Biden-Harris Administration’s priorities, the agency remained a global leader in providing data related to climate change including unveiling a concept for a new Earth Information Center, and published NASA’s first Equity Action Plan. Congress also passed, for the first time in five years, a NASA Authorization Act. And in 2022, NASA reached a decade of excellence by being named as the Best Place to Work in the federal government among large agencies by the Partnership for Public Service for an unprecedented 10th consecutive time.

Below is a summary of accomplishments, demonstrating how in 2022, NASA explored the unknown in air and space, innovated for the benefit of humanity, and inspired the world through discovery.

Preparing for human lunar exploration
Among the accomplishments for NASA’s human spaceflight programs, the agency successfully launched, for the first time, its Space Launch System (SLS) rocket, which put NASA’s Orion spacecraft on a path that traveled farther than any spacecraft built for astronauts has been before. Through Artemis, the agency advanced plans to send the first woman and first of color to the Moon. Leading up to the historic Nov. 16 launch of Artemis I, as well as a successful Orion splashdown on Dec. 11, NASA completed multiple key milestones for SLS, Orion, and ground systems:

The agency also completed numerous key Artemis milestones that will ensure not only a human return to the lunar surface, but long-term exploration on and around the Moon in preparation for sending the first astronauts to Mars:

Maintaining human presence in low-Earth orbit
The NASA Authorization Act passed by Congress extended America’s participation in the International Space Station through at least Sept. 30, 2030, enabling the U.S. to continue to reap the benefits for the next decade while the agency works with American industry to develop commercial destinations and markets for a thriving space economy. This was the 22nd continuous year of human presence aboard the orbiting laboratory. Here are some accomplishments in 2022:

Through CLPS, NASA selected two new science instrument suites – including one that will study the mysterious Gruithuisen Domes for the first time – for priority Artemis science on the Moon through the agency’s Payloads and Research Investigations on the Surface of the Moon (PRISM) call for proposals.  NASA also awarded Draper a contract to deliver Artemis science investigations to the Moon in 2025. The experiments riding on Draper’s SERIES-2 lander are headed to Schrödinger Basin, a large lunar impact crater on the far side of the Moon, close to the lunar South Pole.

Developing New Technologies for Benefit of All
NASA advances capabilities for space exploration, tapping entrepreneurs, researchers, and innovators across the country for solutions that will enable missions for decades to come. From launching space missions to demonstrating advanced technologies to supporting the development of early-stage concepts, 2022 highlights include:

Progressing toward new era of air travel
NASA worked with its partners and the private sector to advance sustainable aviation by developing and testing new green technologies that will revolutionize air transportation. The knowledge and technology generated by the agency will provide regulators and industry with new ways to integrate sustainable solutions. Over the past year, the agency:

Prioritizing Diversity, Equity, Inclusion, and Accessibility (DEIA)
This year, NASA developed and launched an agencywide DEIA Strategic Plan to recruit, hire, support, engage, and retain the most talented and promising individuals, from all backgrounds and life experiences, to be part of the NASA family. NASA also:

Inspiring Artemis Generation through Science, Technology, Education, and Math
Through a variety of STEM outreach activities, NASA sought to inspire a new generation of students and encourage them to become the next scientists, engineers, and astronauts. NASA conducts its STEM work through partnering with key organizations, awarding a variety of grants, and more. STEM highlights in 2022 include:

Among the many collaborations that allowed NASA to educate and inspire new audiences:

Visit: to learn more about NASA’s research, missions, and discoveries.